The Morizo Edition of the 2023 Toyota GR Corolla has been unveiled and is ready to hit the track. In addition to the weight reduction and excellent engine performance, the sporty Corolla should handle better owing to more sticky rubber and enhanced stiffness provided by this particular version. Prices for the 2023 model year have not yet been disclosed; they are expected to be released later this year.

As with the Core and Circuit versions, the Morizo Edition is powered by the same 300-horsepower turbo 1.6-liter three-cyl engine but has an additional 22 pound-feet of torque, making it 295 pound-feet of torque. The maximum torque is generated at 3250-4600 rpm, which is a lower plateau than the typical 3000-5500 rpm range. The Morizo’s six-speed manual gearbox is also available in a low-ratio variant with shorter gears.

The Hyundai Veloster N, Honda Civic Si, and Volkswagen Golf GTI & Jetta GLI, all of which have won 10Best awards in their respective categories, will be competing against Toyota’s new GR Corolla in 2023. Because of this, the GR Corolla is set to rival the top two hot hatches, the Volkswagen Golf R and the future Honda Civic Type R.

For this model year, Toyota used a turbo three-cylinder engine found in the GR Yaris hatchback, which is sold in other countries worldwide. It was tweaked up for the GR Corolla by an eye-opening 185.4 hp per liter and 43 horsepower more than in the GR Yaris. Toyota’s GR-Four AWD technology is standard on all versions. However, only the manual gearbox is offered.

In addition to the 60/40 front-to-rear split for daily driving, the GR-Four system offers three other power-distribution modes: 60/40 front-to-rear for everyday driving, 30/70 for drifting, and 50/50 for racing. Corollas currently on sale, even the sporty SE and XSE variants, don’t provide particularly sporty handling or acceleration. Still, the GR’s suspension and powerplant have been upgraded, making it a serious challenger in the sport small car category.

For the Core model, limited-slip differentials are available as an option on the Circuit Edition trim. Still, they are included as standard equipment on the Circuit Edition model. Compared to the ordinary model’s 273 lb-ft, the limited-edition Morizo’s 295 lb-ft of torque, lighter forged wheels, custom-tuned suspension, and ultra-sticky Michelin Pilot Sport Cup 2 tires make it a track-focused machine.

To date, this is the most extreme interpretation of the contemporary Corolla. The Toyota GR Corolla’s bodywork has a slew of racy accents that look great from every angle. Grilled matrix grilles on each side of an air duct at the front are distinctive to GR-badged vehicles. The 18-inch cast alloy wheels have 15 slim spokes and bulging front & rear fender flares. A gloss-black grille & integrated LED fog lights are seen on the Circuit Edition. However, both versions include LED DRLs.

The first thing you’ll notice on the car’s rear is the stainless steel exhaust pipes with triple exhaust. The three-piece silencer with valves improves efficiency while reducing exhaust pressure and outside noise. The Circuit Edition’s lower bumper cover has a gloss-black finish and functioning air vents. The carbon-fiber roof is another feature of the latter variant. Carbon sheet molding compound, rather than woven material, forms the roof’s lower-center-of-gravity structure. It’s not the conventional Corolla-branded weight-cutting measures you’ll find here.

White, black, & Supersonic Red are among the colors in the Toyota GR Corolla’s Core trim. In contrast, the Circuit Edition’s black is replaced with Heavy Metal.

The inside of a Toyota GR Corolla

Keep up with the latest news and entertainment in the Toyota GR Corolla thanks to the standard 8-inch touchscreen audio/multimedia system with Apple CarPlay® / Android AutoTM wireless connectivity and Over-the-Air (OTA) updates. The new seats have upgraded Ultrasuede® & synthetic cowhide seats that provide a perfect balance of comfort & support. Two USB ports, a 12V auxiliary outlet, illuminated footwells and trays in the front and back consoles are among the other standard interior features.

The regular Corolla is one of the most fuel-efficient vehicles. Still, the GR version is geared only at delivering the best performance. Fuel efficiency is expected to be rather good because of the vehicle’s 1.6-liter, three-cylinder engine. Our best guess is the 30mpg highway, which falls between the Veloster N’s 29mpg road and the Golf GTI’s 30mpg highway (32 mpg highway).

Since the inside of the GR Corolla is primarily based on the conventional hatchback, expect high levels of craftsmanship, soft-touch materials, and standard equipment, but with more aggressive styling and sportier seating. The Circuit Edition comes standard with automatic temperature control, leather seats, and a steering wheel, as well as suede or faux-leather interior in lieu of cloth on the basic model. Ambient lighting, a six-way adjusted driver’s seat, push-button ignition, and metal pedal covers are included as standard equipment.

Also Check: Is it worth buying a 2023 Jeep Grand Cherokee; have a look here

Toyota has deleted the rear seat, rear loudspeakers, and the sporty coupe window wiper to cut weight in the Morizo Edition, which promises excitement. Lap times are faster when the importance of the vehicle is reduced. The front seats have a red-and-black upholstery design, while the shift lever, parking brake button, and steering rim are all covered in edgy faux-suede.

Price and Competition for the 2023 Toyota GR Corolla

The 2023 Toyota GR Corolla’s pricing has not yet been released. Our best guess is that it will cost around $35,000 MSRP in the United States. New Volkswagen Golf R and a forthcoming Honda Civic Type R will compete. At $43,645, the Golf R’s manual transmission is also an option. The GR Corolla’s fast three-pot and dynamic chassis should make it even more entertaining than the Toyota, despite being a more expensive option. Dealers’ pricing of the GR Corolla is another matter entirely.

New Volkswagen Golf R and a forthcoming Honda Civic Type R will compete. Our best guess is that it will cost somewhere around $35,000 MSRP in the United States. At $43,645, the Golf R’s manual transmission is also an option.

When can we expect the all-new 2023 Toyota Corolla GR to be on sale?

The 2023 Toyota GR Corolla is expected to be on sale in the fall. Two trim levels are available for the GR Corolla: the standard Core and a limited-edition Circuit Edition. For the time being, the Core trim will be available, and the Circuit Edition will be released in 2023.

Is there a certain number of GR Corollas made?

Toyota will also offer limited and unique versions of the GR Corolla, keeping manufacturing numbers low. In addition to a slew of carbon fiber pieces and an enormous rear wing, the Circuit Edition is only available for the 2023 model year.

What engine will the GR Corolla be powered by?

Toyota’s incredible 1.6-liter three-cylinder engine was tuned to increase power from 257 to 300 horsepower. As a consequence, we’ve got a genuine work of automotive art. Since the GR Corolla was shown last week, we’ve been pushing Toyota PR for additional information.

Which Toyota Corolla has the most incredible power?

Corolla GR is an updated version of Toyota’s best-selling vehicle, the Toyota Corolla, inspired by racing cars. There are two options for the vehicle: Core and Circuit Edition, which will be available later this year in foreign markets.

Toyota GR Corolla will have four doors or not?

A performance version of the four-door 2022 Toyota Corolla Hatchback is what we expect from the Toyota GR Corolla, which we haven’t seen much of yet. Toyota GR Yaris in Europe and Asia is powered by a 300-hp 1.6-liter turbocharged engine, according to several claims.

The 2023 GR Corolla is the culmination of a lot of hard effort, and it’s terrifying. Gazoo Racing, Toyota’s performance-vehicle skunkworks, has been given free rein to give the small Corolla hatchback a tuner makeover. The GR Corolla gets its turbocharged 1.6-liter three-cylinder engine from Toyota’s GR-tuned subcompact Yaris, which is already available worldwide. There is just a six-speed manual gearbox and all-wheel drive available for the small three-cylinder engine.

For years, Toyota has been trying to spice up its inventory with livelier and more fashionable vehicles, such as the Supra sports car that was just reintroduced. This rally-racer-inspired hot hatchback should aid in that quest. Before the end of 2022, we anticipate seeing the GR Corolla in Toyota dealerships. 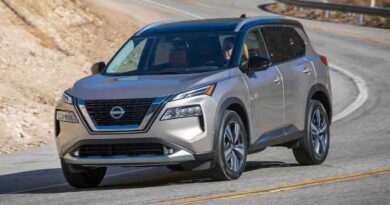 ALL ABOUT THE 2022 NISSAN ROGUE